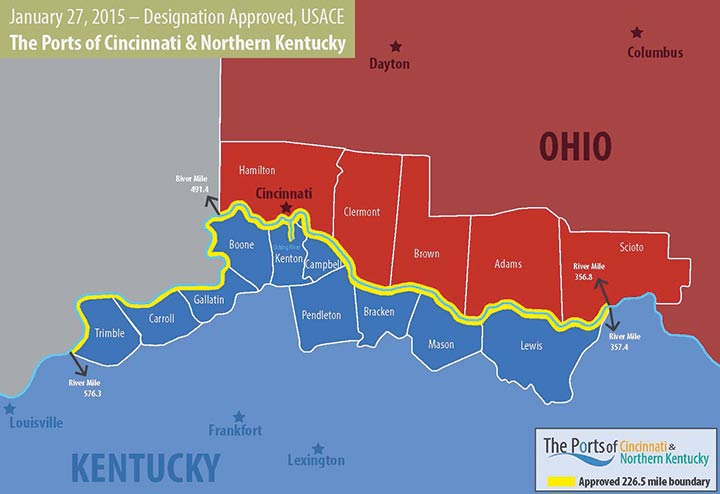 COVINGTON, Ky. – Officials and leaders from government, business, economic development organizations and the region’s maritime industry gathered Thursday for the dedication of the re-designated Ports of Cincinnati and Northern Kentucky.

Driven by The Central Ohio River Business Association (CORBA) and approved earlier this year by the U.S. Army Corps of Engineers, the Ohio River boundaries of the re-designated port – now officially known as The Ports of Cincinnati and Northern Kentucky – have been expanded from 26 miles to 226.5 miles including a seven mile stretch of the Licking River in Northern Kentucky. The new port includes all or part of 10 counties in Kentucky (Boone, Kenton, Campbell, Pendleton, Bracken, Mason, Lewis, Gallatin, Carroll and Trimble) and 5 counties in Ohio (Hamilton, Clermont, Brown, Adams and Scioto.)

“The U.S. Army Corp. of Engineers’ approval of the port re-designation, which will enhance and stimulate river-borne commerce along the Ohio River, is a wonderful example of what can be accomplished when local agencies, the federal government, states and 15 county governments work together to complete a mutually beneficial project,” said Congressman Thomas Massie of Kentucky’s Fourth Congressional District, who serves on the Water Resources Subcommittee of the House Transportation and Infrastructure Committee. “I’m sure both sides of the Ohio River will benefit from the continued development of this resource as tonnage grows along the Ohio and Licking Rivers.”

With the new boundaries, the Ports of Cincinnati and Northern Kentucky moves about 48 million tons of cargo a year, ranking it 15th among all U.S. ports and number two among U.S. inland ports.

“Our region possesses a port complex that is the envy of many major metropolitan regions in the heartland; a port that includes a navigable waterway” Thomas said.

“The idea of a re-designated port of Cincinnati was born at the table of the River Advisory Council,” he said. “The devoted and dedicated champion of that group over many years has been Mr. Eric Doepke who through RAC has kept the dream of this day alive for the many, many years.”

CORBA represents an alliance of businesses and industries engaged in river commerce on and along the Ohio River and her tributaries throughout the tri-state region of Kentucky, Ohio and Indiana. CORBA worked closely with, among others, The Port Authority of Cincinnati Development Authority and the Northern Kentucky Port Authority on the re-designation.

“For more than three years, regional partners collaborated on making the Ports of Cincinnati and Northern Kentucky the inland port of choice for the movement of freight through North American,” said Hamilton County Commissioner Todd Portune. “It was CORBA that launched the initiative and CORBA deserves our thanks tonight as we celebrate the re-designation.”

Laura Brunner, president and CEO of the Port of Greater Cincinnati Development Authority, thanked organizations that worked on the re-designation including REDI Cincinnati, Northern Kentucky TRI-ED and The Ohio-Kentucky-Indiana (OKI) Regional Council of Governments.

“Ohio and Kentucky play a key role in global logistics and international trade,” Brunner said. “Tonight, as we share this magnificent view of The Ohio River together, we can appreciate a future that builds on regional partnership and shared purpose to advance economic opportunity. This new port provides us a common language to engage in that work.”

Northern Kentucky Port Authority Chairman Roger Peterman said working closely with the Port of Cincinnati Development Authority on the re-designation was a tremendous experience that he is anxious to continue.

“The ports’ re-designation stemmed from an unprecedented, multi-jurisdictional, bipartisan effort that truly defines regionalism and which should serve as a model for future collaboration,” states the acclamation, a copy of which was presented to CORBA during Thursday’s celebration.

In a proclamation commending the organizations involved in the re-designation, Ohio Gov. John Kasich pointed out the potential economic boost of growing the ports’ boundaries.

“This re-designation will bolster trade and commerce along the Ohio River and create more economic opportunities to grow jobs throughout Greater Cincinnati and Northern Kentucky,” Kasich said in the proclamation, which was also presented to CORBA Thursday.

During the celebration Thomas also announced the formation of a new organization called the Tri-state Regional Maritime Council. Housed within CORBA but an independent body, the Council’s goal is to include representation of the 19 counties in Ohio, Kentucky and Indiana with a charge to collectively leverage the four port components of the region “and to work together to jointly promote the regional port as has never been done before,” he said.

“The opportunities are many, but this opportunity is once in a lifetime,” Thomas said. “I hope that all of you gathered here today share in this vision and will support this new initiative.”

To learn more about CORBA log on to: www.corba-usa.org.

About CORBA
CORBA – The Central Ohio River Business Association – represents an alliance of businesses and industries engaged in river commerce on and along the Ohio River and her tributaries throughout the region. CORBA’s mission is to unite river business and industry to speak with a common voice in promoting commerce, safety and security, environmental stewardship and public relations for the Central Ohio River Valley Region 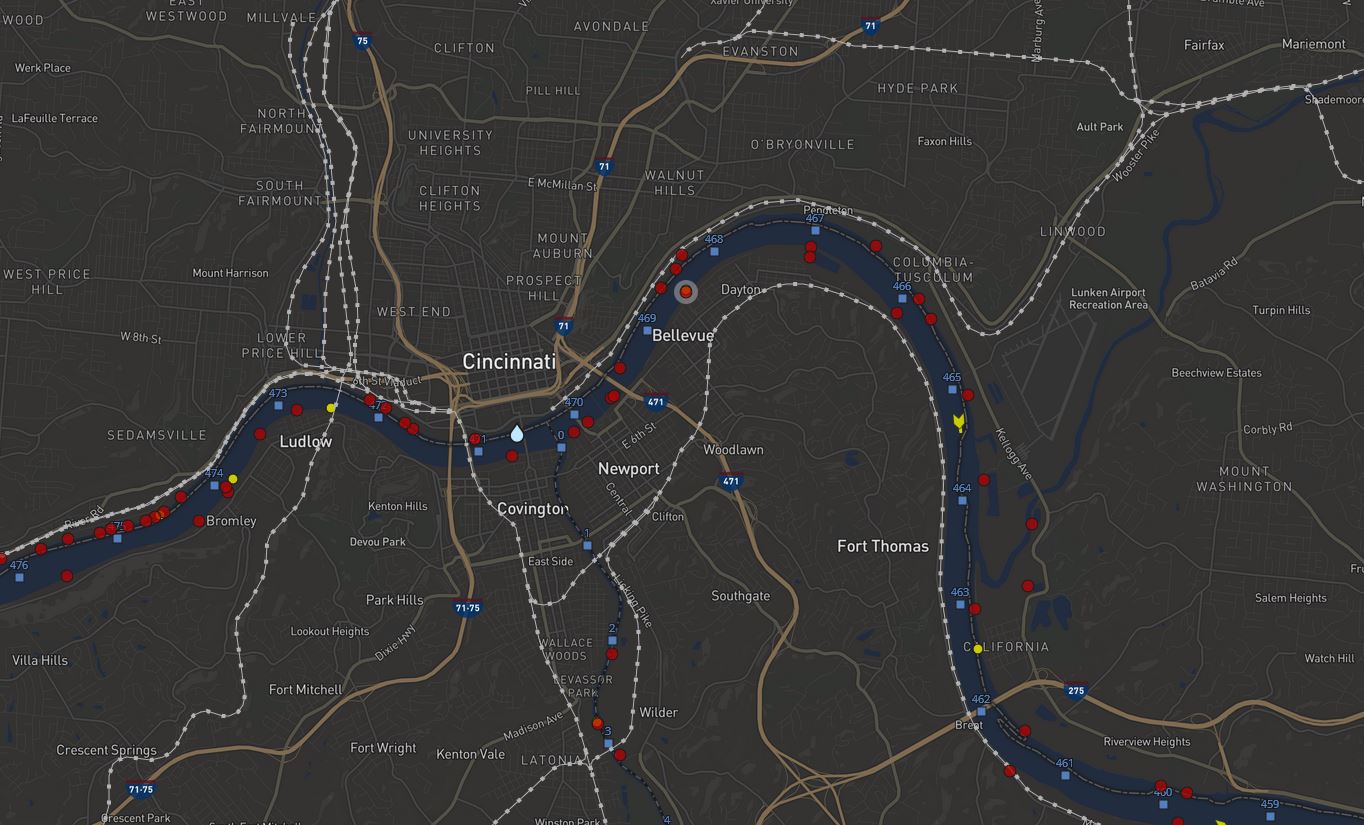 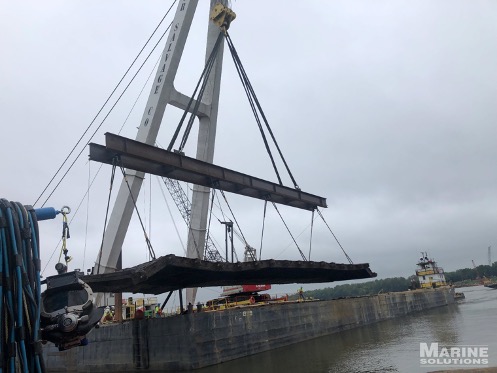 We are pleased to announce the CORBA Member Spotlight for the month of April ABOUT MCGINNIS INC. McGinnis, Inc. is a subsidiary […]